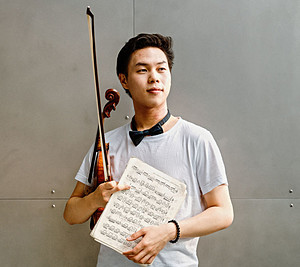 As a child, he dreamed of becoming a pilot. For hours, he would stand with his father on the lookout platform of the airport in his hometown of ­Victoria in Canada. “Watching planes come in to land just fascinated me,” Chooi, now 25, ­recalls. One day, he was given a violin, and from that day forward, he never wanted to stop playing.

1 FIDDLE
This Stradivarius was made in 1717. When I play it, I feel like I’m holding a piece of old art in my hands. I won the loan of it at a competition in Canada four years ago.

2 BOW TIE
I used to keep leaving it at home and having to rush around the city ­before a concert, looking for a new one! That’s why a bow tie is now the first thing I pack.

3 MUSIC
I’ve got some sonatas by Johann Sebastian Bach with me. I’ll go through them on the plane in preparation for my upcoming concert. For me, it’s a meditative process.